The most famous city landmark in Orvieto is its beautiful cathedral called the Duomo. It incorporates a variety of architectural styles including Gothic and Romanesque.

The cathedral has a stunning facade and an interior that contains some amazing frescos, statues and paintings by artists including Cortona and Luca Signorelli.

Watch out for the beautiful mosaics on the facade as well as biblical scenes including a scene from Hell. 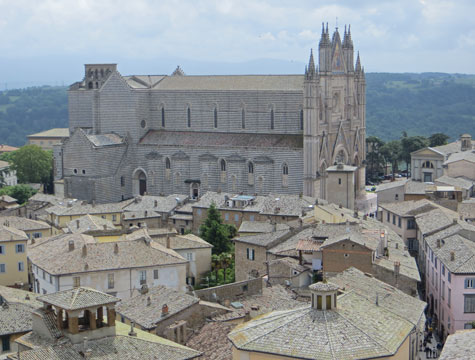 The cathedral has two chapels: the San Brizio Chapel and the Corporale Chapel.

Construction of the massive building began in 1290.  The Duomo in Orvieto is located southeast of Del Morro Tower.